Green roofing: the topic for the future! 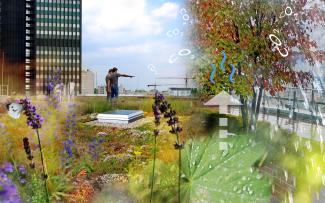 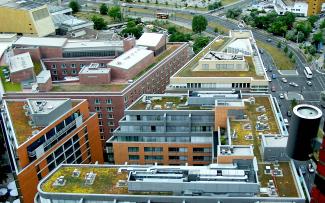 Urban settings have to better utilise the maximised ecosystem performance of green roofs – such a lot is possible these days. 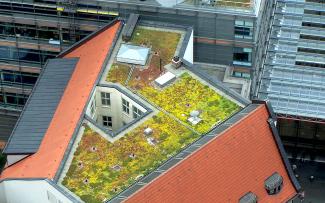 Every square metre of green space is valuable, particularly in urban settings, and helps in the case of heavy rain events, heating and fine particle pollution. 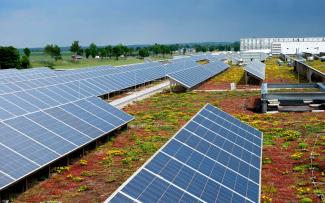 Solar and green complement each other perfectly as the plants ensure a lower ambient temperature and they therefore increase the yield from the photovoltaic system. 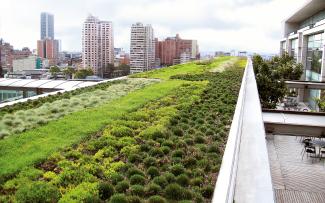 The Urban Climate Roof provides for maximum evaporation performance, which mitigates urban heating and with that the risk of localised heavy rain events.

These retention spacers enable roofs to retain maximum volumes of water, therefore providing relief for the sewage system in the case of heavy rain events. 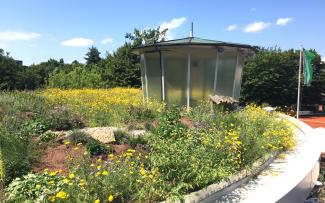 Biodiversity modules increase the variety of species on the roof, enabling insects and birds to find many forage crops and nesting places in stones, insect hotels and even in deadwood. 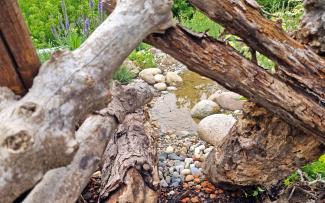 Deadwood provides a habitat for mosses, lichens, fungi, beetles and other insects, and should really be referred to as “biotope wood”. © Hohenschlaeger/ZinCo 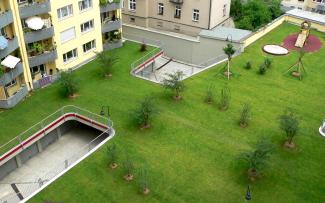 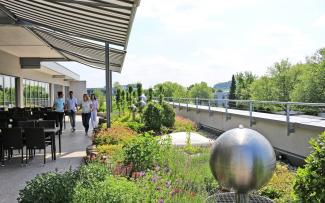 Whether a building is new or is to be refurbished, the potential inherent in all of these roofs can be comprehensively exploited with green roofing.

Where will the journey take us?

People need sound ecosystems to live in. The catastrophic flooding that occurred in Germany in the summer of 2021 is one of the most painful experiences that will accelerate a change in attitude among policy makers and within society.  And, it is not before time. Decisive measures aimed at adapting to climate change, which involve the creation of a liveable green and blue infrastructure, are long overdue - even though the technical ways and means are here already. As regards integrating green roofing, ZinCo notes that there is often a lack of awareness of the various greening options available to us today.

Anyone who started out over 50 years ago as a pioneer in green roofing, as did ZinCo, can look back over a long period of development during which green roofs blazed a trail and became popular. Looks good, in some places it’s even a requirement, but at times it is constantly overshadowed by preconceptions. Some clients are still wary of water on a roof, while ignoring the fact that a green roof will extend the service life of a flat roof many times over. This may be one of the reasons why more roofs are not greened, quite apart from the additional costs. The potential here is immense as demonstrated once again by the recent market report by BuGG, the German Green Roof Federation. According to the report, only 9 % of the new flat roofs built in Germany in 2019 were greened. The situation is similar with regard to existing roof space, at least according to the register of potential green roofs. The roofs are already there – how negligent of us then not to make use of the high performance levels of green roof ecosystems in the face of pressing climate issues.

Green roof planners and contractors usually say: ZinCo? We know ZinCo and have been using them for a long time, across the board: from extensive green roofs on flat and pitched roofs, to wonderful roof gardens and greened underground parking decks”. However, if you dig deeper, many of them are unaware of the fact that it’s about so much more at the level of implementation. It’s all about increasing the ecosystem performance of green roofs in relation to their water retention capacity, evaporation performance and biodiversity. With today’s greening systems, we have moved far beyond the often practised minimum greening. Technically speaking, this is the future! And this knowledge has to reach not only the experts but also the policy makers and society as a whole.

It is also the duty of the politicians

The state government in Baden Wuerttemberg comprising a Green-Christian Democrat (CDU) coalition, is forging ahead with their coalition agreement, aiming to provide for the “design of building roofs, green spaces and street areas that are fit for the future, for example, by using them as retention spaces”. Using a number of sample regions, the government wants to increase the climate resilience of towns and municipalities, while testing solutions for retention, desealing, seepage and evaporation”. Business parks are also intended to be “space saving and designed to be as close to nature as possible, where flora and fauna will find a habitat in outdoor spaces, roofscapes and on facades”. This contractual stipulation is an important and appropriate step forward. But, we must go even further if we are to implement a blue and green infrastructure quickly and extensively.

In addition, many people appear to think in terms of competition, for example, solar vs green. However, solar and green can work together while creating synergy effects, as the greenery will demonstrably increase the performance of the photovoltaic system due to the comparatively lower ambient temperature. However, this combination is not yet prescribed by politicians, not even in the state of Baden-Württemberg which is governed by a Green-CDU coalition. Since the last legislative period, the use of solar energy in new commercial buildings has become mandatory, requiring the installation of a photovoltaic system. And, under the amended Climate Protection Act, the use of solar energy in residential properties will be mandatory from 1 May 2022. Fantastic, great progress, but it doesn’t go far enough! The extensive roof areas of shopping malls, office buildings and schools can handle more than just solar energy installations, they can handle and actually need greenery! In addition, the combination with retention green roofs is not a problem in new buildings as they are structurally designed for this right from the start.

The natural water balance shows an evaporation share of more than 50 % of natural precipitation. This evaporation process draws heat from the surrounding area which minimises the heating of urban areas. Less heating means fewer intensive precipitation events. Heavy rain is directly connected to the fact that warm air can absorb more moisture. When warm and moist air rises and cools down at the same time, water vapour forms (convective clouds). This condenses into water, releasing heat which reinforces the uplift. Convective clouds like this occur locally and discharge quickly – frequently with thunderstorms and hail.

Unfortunately, the reality of the matter is that in cities the level of sealing is immense. In Germany, an additional 60 ha approx. of settlement and traffic space are added day by day (grey infrastructure). The sealing in itself results in increased heating and at the same time precipitation running off largely through the sewage system and no longer being available for natural evaporation. Normal water cycles are destroyed. Climate change has brought ever more frequent heavy rain, the sewage networks are dangerously overloaded and urban flash flooding is inevitable. Towns and cities urgently need planted spaces (green infrastructure), that is to say, building greenery, parks, public and private gardens, roadway greenery and greened noise barriers.  Each square metre of greenery is capable of storing water and then allowing it to evaporate – and the green roof technology available today maximises precisely these processes.

ZinCo was already examining the run-off behaviour of green roofs 10 years ago, in collaboration with the HafenCity University Hamburg (HCU). That marked the start of the development of the “Stormwater Management Roof” with spacer elements which, for example, can store an additional 60 l/m² of stormwater and release it with a time delay through a run-off limiter in order to relieve the sewage system. Even multiple amounts of water are possible, depending on how the spacer elements are modified. These storage volumes are therefore in addition to the storage capacity of the actual greenery itself. With a conventional extensive green roof this is between 20 and 40 l/m² of water and with an intensive green roof between 50 and 100 l/m². It is no problem to plan and design in advance for the structural load capacity of a new building – we only have to think of underground parking decks! A lot is possible if only the politicians and the clients were to follow this goal. This includes the concept of the “sponge city” which seeks to temporarily store stormwater where it falls – thanks to green roofs, green spaces, permeable traffic areas, troughs, infiltration ditches and waterways (blue infrastructure). This allows not only for flood management but it also contributes to the management of the urban climate.

A few reference values in this context: 300 l of evaporated water per day are capable of cooling the air volume of a 100 m × 100 m × 100 m cube by approx. 3–5 °C. On a hot summer day, a mature, well irrigated city tree can transpire up to 300–500 l of water. A 100 m² conventional extensive green roof can also do that but not over a long dry period. In that case, the evaporation rate drops to about a tenth. Using the special “evaporation-maximised” ZinCo system build-up “Urban Climate Roof”, the evaporation rate can be increased to about 700–1000 l per day and 100 m² of roof area and this can be maintained even during dry periods. This is done using a special plant community and demand-based irrigation with grey water. This system build-up is the result of research that began back in 2012 together with Weihenstephan-Triesdorf university. So, the green roof technology is already available! And, the topic of grey water should shift to centre stage in all areas of life as a matter of urgency because the water needs of people are depleting the drinking water resources.

Infrastructure is needed to use grey water, which can also be planned for new buildings by separating and collecting wastewater run-off, with the exception of water from the toilet. Grey water is always available which is a huge advantage compared with water from a reservoir. If the use of grey water relates to the same building, then at district level there is an additional approach where the water that accumulates at the end of a wastewater treatment plant can be used for irrigation purposes. This is regardless of whether it is a small wastewater treatment plant or a large municipal plant. ZinCo is currently involved in a pilot project on this subject with a number of partners including the University of Stuttgart that has access to the largest wastewater treatment plant for research and education purposes in Europe.

Green roofs make an important contribution to preserving the biodiversity of flora and fauna provided they are appropriately designed and laid out: with a rich selection of forage crops for insects and birds, with deadwood, sand lenses and with gravel beds providing refuge and small water areas as troughs. Insect hotels and bumble bee nesting boxes are very positive and, as with the other biodiversity modules, are easily installed in existing green areas, in order to create biotopes that are rich in species. This should be the goal of every green space.

Quality of life in an urban setting

Flash floods in urban areas, long periods of drought, urban heating, high levels of fine particles, insect die-off – green roofing can and must contribute to mitigating these effects. In times of continuous urbanisation and redensification, and quite apart from the climatological and ecological issues already addressed here, it is also all about the fundamental significance of “green” for people’s health. Green creates well-being, it strengthens the immune system and it reduces stress. Whether it’s a parkland over an underground garage, your own roof garden or simply a view of the greened neighbouring building, green will always add to our quality of life.