Hops and citrus thyme from rooftop to craft beer 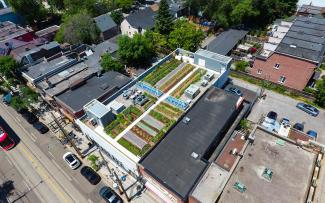 The urban farming roof at the Avling Kitchen and Brewery in Toronto is a wonderful example that might inspire the surrounding, triste rooftop desert to opt for green roofing. © Avling 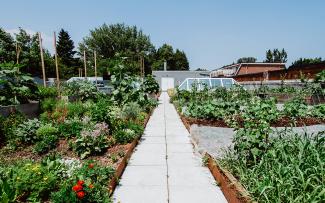 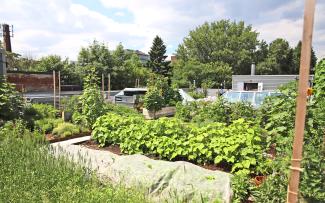 Everything is grown organically, self-harvested and used straight from the garden by the restaurant kitchen. Special herbs and spices are used for the seasonal craft beers. © Avling 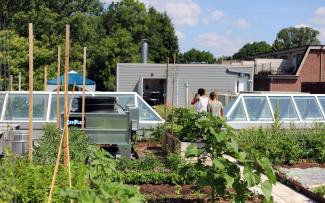 Urban farming is absolutely possible on roofs in the middle of a densely built-up area. © Avling 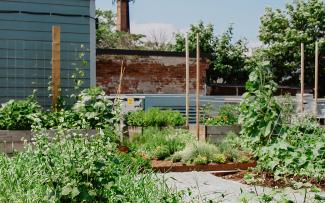 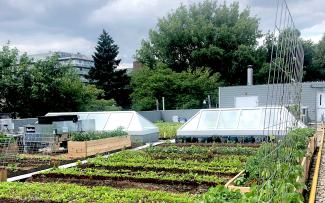 For most of the plants, a system substrate depth of 20 cm is sufficient, however, certain types of plants with deeper roots thrive in the raised beds with up to 60 cm substrate depth. © Avling 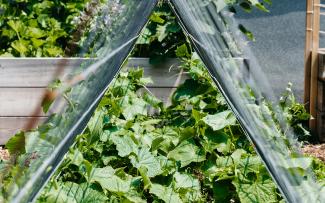 The cucumber plants are given support on their upward journey. © Avling 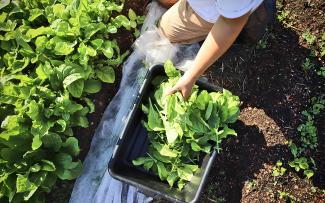 The farm to table idea puts the harvested crops directly onto the plate: lettuce tastes best when it’s this fresh! © Avling 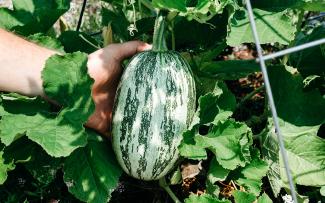 The heat-loving courgette is at home on the sun-exposed roof. © Avling 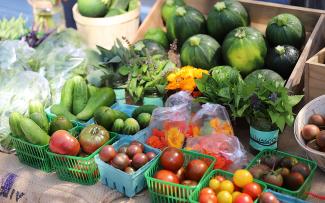 The menu at Avling Kitchen is filled with harvested produce from the roof, ensuring that each meal is a special pleasure. © Avling 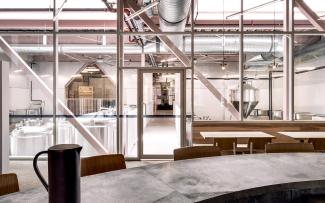 Interesting perspective: The large fermentation tanks for producing the beer can be seen from the restaurant. © Avling 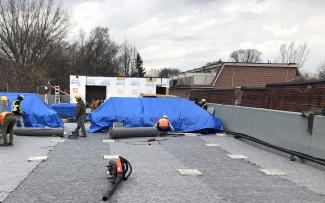 Due to being supplied in rolls, the protective layers in the build-up are quickly installed: Protection Mat SSM 45 is already being fitted here. © ZinCo Canada 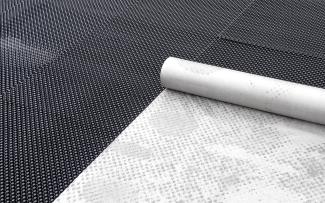 The drainage and water storage elements Floradrain® FD 40-E are covered with the System Filter TG in order to prevent the penetration of micro-particles from the substrate layer. © ZinCo Canada 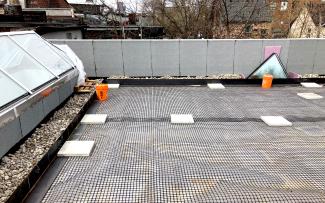 Framed by angle separator profiles, geogrids are also installed in the vegetation area. They protect the drainage layer from penetration during digging. © ZinCo Canada 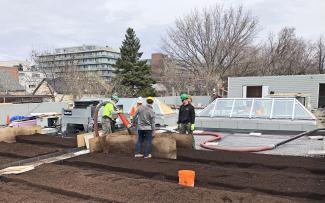 The system substrate was blown onto the roof in this way and distributed to create two identical plant beds - thanks to this separation using the formwork panels. © ZinCo Canada 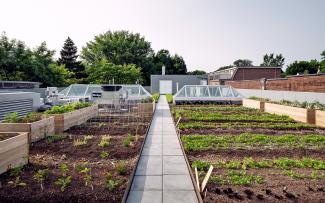 “Fresh ingredients taste better” is the guiding principle of the farm to table movement and nothing could be more natural than using your own roof for growing herbs, vegetables or even hops. The Avling Kitchen and Brewery in Toronto has proven this with their 400 m² roof garden that supplies all kinds of ingredients for their own brewery and restaurant. And, the ZinCo system build-up “Urban Rooftop Farming” will ensure that everything will grow perfectly on this special roof location.  A textbook example of local and sustainable circular economy.

The name “Avling” means “harvest” in Norwegian. It was chosen by founder and proprietor of the Avling Kitchen and Brewery, Max Meighen, and couldn’t have been more appropriate. Meighen, a chef and a brewer, wondered if a brewery could be part of the farm to table movement. The movement can be traced back to US American restaurateurs who only use local, and therefore the freshest, products in their kitchens because such products taste far better. The local aspect of the farm to table idea applies across the entire spectrum, from planting, to harvest, storage, processing, sales (local farmers’ markets) and consumption. One of the pioneers and a representative of the movement is Dan Barber who, in his book The Third Table. Field Notes on the Future of Food (2014) describes new approaches for farming and nutrition as an alternative to industrial food production. Inspired by this philosophy, Max Meighen set out to find a suitable location for his idea of a farm to table brewery.

In Queen Street East in Leslieville, on the east side of downtown Toronto, he found what he was looking for. With a population of 3 million, Toronto is the largest city in Canada and the capital city of the province of Ontario. Meighen found a building from the mid-1900s in need of renovation, in a densely built-up area. Previously a grocery store, this inhospitable 975 m² compound was more recently used for growing bean sprouts.

The Lee and Macgillivray Architecture Studio, known as LAMAS, in Toronto, planned the transformation of the two-storey building in line with Max Meighen’s own ideas. In order to be able to demonstrate beer making, a high ceiling was required for a number of 4.8 m high and 4000 litre-capacity fermentation tanks in the brewery. The restaurant is integral to the overall complex, as is the brewery, not to mention the 400 m² roof garden which supplies tasty ingredients for both brewery and restaurant. The planned green roof required just as much a precise structural calculation as the floor cut-out needed for the high ceiling. To achieve the necessary load-bearing capacity, they literally almost doubled the amount of steel in the building. The roof itself consists of a wooden structure with rock wool insulation and a root-resistant roof waterproof membrane. Then, in order to use the 2 %-pitched roof for growing, a system build-up was needed that is appropriate for crops. This was supplied by ZinCo through its subsidiary in Canada, ZinCo Canada Inc.

The name is programme

Appropriately, the ZinCo system build-up is called “Urban Rooftop Farming” and it provides perfect growing conditions on the roof location. Despite the fact that access to the roof was restricted for building reasons, the company Ginkgo Sustainability Inc. managed to carry out all green roof works over two weeks. The first layer of the system build-up is the Root Barrier WSF 40 followed by Protection Mat SSM 45. The 40 mm deep drainage and water storage element Floradrain® FD 40-E was then installed as the core piece in this multi-layer build-up. The element stores stormwater in its upper cells and draws excess water off safely to the roof outlets through its underlying channel system. This water-air household is vital to enable the vegetation to become permanently established. The next layer is the System Filter TG which prevents foreign matter from penetrating from the substrate layer, and an additional layer of geogrids which provides protection from cutting too deep when digging with a spade. Most of the actual substrate layer is about 20 cm deep, meaning that eager diggers could quickly dig down to the drainage layer with their spades. The roof is crossed by a straight pathway, with the concrete slabs set in gravel, and the pathway is separated from the planted areas on either side with angle separation profiles. The superimposed load of the substrate layer ensures that the separation profiles stay in place. Towards the edge of the roof on both sides, the raised beds with a wooden frame about 60 cm in height provide sufficient space for deep-root plants. The system substrate “Lawn” is perfect for growing vegetables and herbs due to its considerable organic content. Supplied in a silo truck, the substrate was quickly blown onto the roof and distributed.

The declared goal of Avling Kitchen and Brewery is to have a sustainable organic farm with a wide variety of indigenous plants. This includes herbs (such as basil, lemon balm, oregano, rosemary), different types of vegetable (such as beans, mangold, okra, pumpkin), cereal grain (oats) and pseudocereal (amaranthus, buckwheat), and naturally hops. Flowers (such as nasturtium, sunflowers, zinnia) have to be included as they are just as important for a healthy eco system. After all, they do attract butterflies and bees. Crop rotation is important when planting, which means planting different crops on the same piece of land across the different seasons. The type of crop is also selected with a view to allowing for the longest possible harvest period through the year (from early spring to December). The freshly harvested crops are sent directly to the restaurant kitchen ensuring a recipe for success at the Avling Kitchen.

The gardening team at Avling works closely with the Ecological Farmers Association of Ontario and with Minikaan, a group of indigenous farmers. This involves using plant types that are endemic in Canada and best suited to this location. Composted kitchen waste is used as a natural fertiliser and as a result helps to maintain a healthy soil.

Avling Kitchen and Brewery is currently also research partner with ZinCo Canada to establish data on soil amendments for rooftop farms using FLL growing media. The partnership between ZinCo and Avling Brewery will be the first of its kind in Canada and will surely provide deep insight into the science behind rooftop farming and the opportunities that it presents dense urban areas.

Craft beer with a special flavour

Craft beer, which is beer that is brewed non-mechanically, is trending in Toronto. The special thing about the craft beers brewed at the Avling Brewery is their local ingredients. At least 15–20 % of grain from Ontario is used in each beer and 95 % of the fruits, spices and bitter ingredients are from Ontario or Quebec. Hops and other ingredients such as citrus thyme, pineapple sage or pot marigold are supplied directly from the rooftop. The Avling beers are as extraordinary and seasonal as their ingredients, and their success proves Meighen right given that Avling Kitchen and Brewery were already winners of the “Best New Toronto Brewery Award” in July 2020, having only opened their doors in 2019.

The circle is closing

The combination of brewery and roof garden provides for an additional synergy effect given that the wastewater from the brewery, rich in nutrients, is collected and used for irrigation on the roof.

A lot of water is needed for brewing, as a rule between three and eight litres of water per produced litre of beer. Now, as a direct result of the brewing process, more and more biological substances such as yeast, starch and sugar compounds are fed into the wastewater. At Avling, the waste water is fed into an oxygenated treatment system that breaks down the sugar and consequently generates high value water for irrigating the roof garden. Another great example of the circular economy!

The recipe for success at Avling Kitchen and Brewery, in addition to the special quality of the products, is certainly its authentic and congenial character. Not only can people visit the restaurant or purchase the local, seasonal produce, they can also take a tour of the brewery and the roof garden. There are numerous garden workshops included in the programme, ranging from beginners’ to advanced, for example, about using herbs, pollination or guerilla gardening. The door is open at Avling for private and corporate events too.

Max Meighen has succeeded in realising his convictions and ideals in terms of the production of sustainable and local produce, and gastronomy. The roof garden plays a crucial role here.

By the way, Meighen has already come up with some new ideas for a second location. This involves aquaponics, that is the combination of fish farming in aqua culture and the cultivation of crops using hydroculture. The system works by using excrement from the fish farms as nutrition for the plants. And, of course, this too is possible on roofs. Watch this space!