A flat roof is one of the best locations for a solar energy system, given that the solar modules can be adjusted to the correct angle and the most appropriate orientation. It is a mistaken belief that one has to decide between a green roof and a solar system. On the contrary with the right system, significant synergy effects are achieved when combining both. 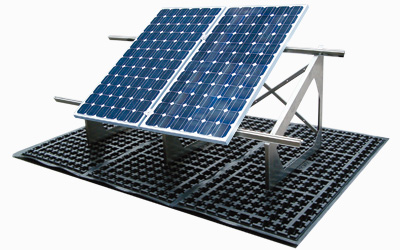 With its Solar Base, ZinCo incorporates solar energy into green roofs and creates synergies, whether it is for generating electricity (photovoltaic) or for heating and hot water applications (solar thermal). The height of the Solar Base Frames creates enough distance between the substrate layer and the solar panels, providing the plants with enough sunlight and rainwater and enabling appropriate maintenance. 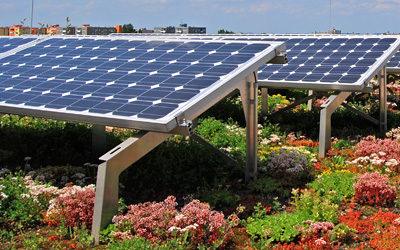 Enhanced performance of photovoltaic modules: The performance of photovoltaic modules depends on the temperature of the modules and the surrounding ambient air temperature. The rule of thumb is: “the warmer the module, the lesser the performance”. In fact, modules heat up considerably as a result of solar radiation. This is impaired by a hot roof surface such as a bare waterproofing membrane or a gravel roof. However, if combined with a green roof, solar modules will perform better. Through the cooling effect caused by evaporation at plant level, the ambient air temperature is cooler and photovoltaic cells improve their performance. 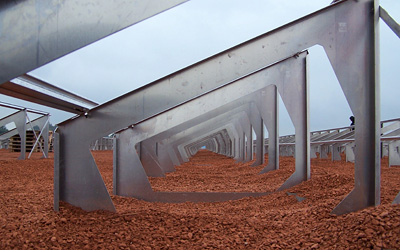 Ballast provided by the green roof build-up: One important synergy effect shows at the construction stage. The ZinCo solar build-up consists of a protection and drainage layer, Solar Base panels and Solar Base Frames. The panels are covered with a prescribed amount of growing medium and the desired vegetation is then planted. The combined weight of the growing media and plants provides the ballast required by the solar energy system to deal with wind loads. Thanks to this ballast principle, roof membrane penetrations that would normally be necessary for anchoring standard solar energy systems are not required. 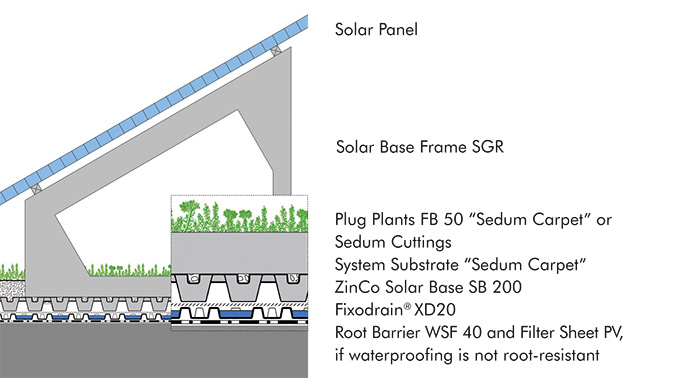 Systems with east-west orientation may achieve a more even yield over the course of the day and avoid excessive current peaks. 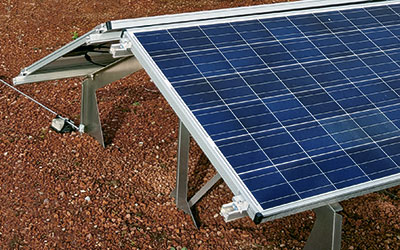 For an assembly of type “Saddle”, two Solar Base Frames are mounted onto a Solar Base SB 200 in a way that their higher ends meet in the middle. The slope of the panels directs more rainwater to the walkways between the solar panel rows, so that an increased plant growth can be expected there. 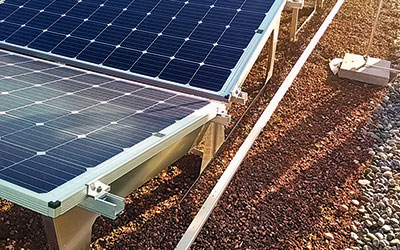 For an assembly of type “Butterfly”, the two Solar Base Frames meet with their lower sides. Rainwater is directed to the middle of the Solar Base SB 200 and distributed from there in both directions. In this case, a rather lush vegetation can be expected under the solar panels.

The PV tubes continually produce solar power because at all times of the day the sun rays hit the relevant tube section at a right angle. Besides, the lightweight PV tubes provide considerably less wind attack area if they are horizontal, and the solar base frame can have smaller dimensions. This allows for a cost-effective lightweight design. The innovative tube technology provides excellent growth conditions for the plants thanks to the permeability of daylight and water. 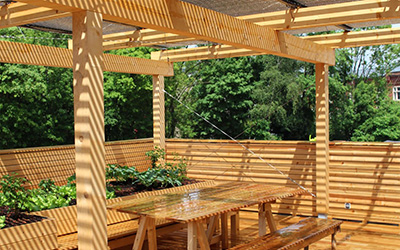 The PV tubes can be mounted at any height and can even be used as a canopy over a patio.

General overview of how solar energy technology is combined with green roofs.