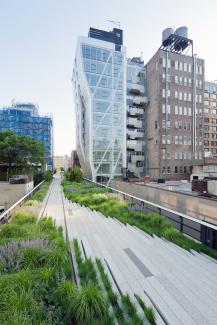 Just how close old and new are to each other can be seen not only with the High Line but also with the adjacent buildings as here in West Chelsea. Source: Iwan Baan 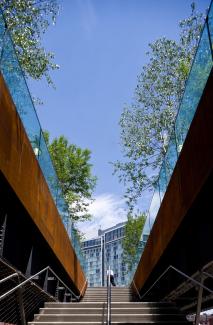 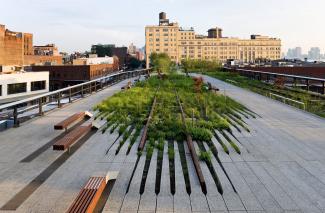 The concrete planks that are tapered at one end, run into the greenery like a comb. Overgrown is welcome! Source: Iwan Baan 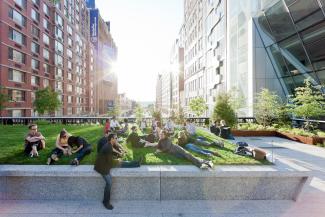 Relaxation on the High Line – simply lie on the grass and lap up the sun. Source: Iwan Baan 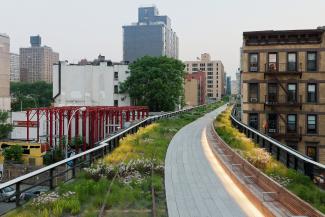 “Radial Bench“ in the second construction phase: the soft curve on the High Line that continues towards the Hudson River starts at 29th Street. Source: Iwan Baan 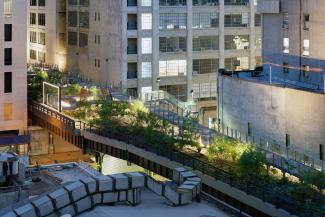 The “Falcone Flyover“ is an impressive spectacle at night-time: the walkway, rising over tracks and plants, is illuminated from below. Source: Iwan Baan 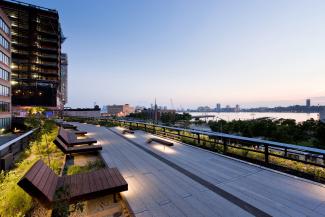 The "sundeck" between 14th and 15th Street. The rolling wooden loungers can be moved around the tracks, as required. Source: Iwan Baan 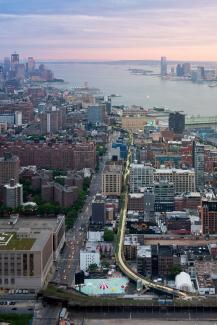 The true dimensions become clear from this birds-eye view: about 800 m of the High Line can be seen here, a third of the total length. Source: Iwan Baan 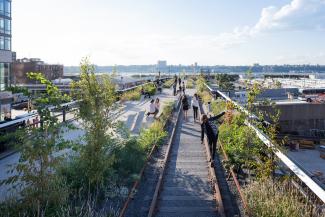 The most recently opened section, the “Rail Yards“ is named after the railway yard which still dominates this area. Source: Iwan Baan 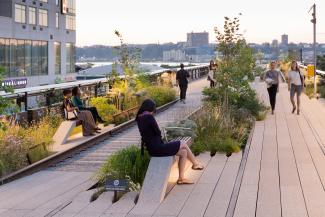 The benches look as if they are growing out of the ground and are a perennial design element. Source: Iwan Baan 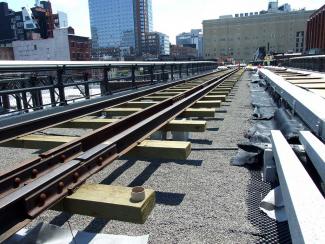 The renovation of the elevated railway track was carried out in three phases. It can now be accessed and used along a length of 2.4 km. Source: Friends of the High Line

It was once a run-down, dilapidated area.  Then came the flourishing vegetation that has transformed an entire district. The converted elevated train track, the High Line in New York, has become the main tourist attraction in the city. Since it was opened in 2009, more than 20 million people have visited the High Line, now accessible over a length of 2.4 km since the third phase was completed in September 2014. The 10 m to 20 m wide park wends its way like a catwalk from Gansevoort Street northwards to 34th Street, unfolding its captivating charm on the way. A success story that is emulated the world over.

The New York High Line opened around 1930, the aim being to remove the risks created by on-street freight trains. After the last freight train rolled along the tracks in 1980, the High Line fell into disrepair and with it the surrounding buildings. Friends of the High Line, a not-for-profit organisation set up in 1999, succeeded in turning the elevated train track into an attractive park, with the support of the City of New York and NY Mayor, Michael Bloomberg. The “longest green roof” in the world to date was created in three phases over a period of 8 years (opened in 2009, 2011 and 2014). The organisation contributes 90 % of the financial costs of the High Line and is responsible for administration, care and maintenance and for organising public programmes.

A permanently reliable base

The planning team consisted of the landscape architect, James Corner and his company Field Operations, architects Diller Scofidio + Renfro and renowned plant specialist, Piet Oudolf. The experienced green roof system manufacturer, ZinCo, provided the technical basis for all the design concepts in terms of plants, walkways and leisure areas. Floradrain® drainage elements were installed on the sealed concrete surface. These profiled drainage elements have troughs on the upper side for retaining precipitation. Excess water is safely drawn off through the channel system on the underside. The Floradrain® elements are installed across the entire area, are filled with growing medium Zincoblend M and are then covered with a filter sheet. This is followed by the vegetation layer. The existing water and electricity supply lines were integrated into the build-up.

Remembrance of things past

The planners have been incredibly successful in incorporating the historical origins of the High Line into the new park, as the former tracks can be seen in a number of places. In addition, Field Operations have developed the so-called “planking” system, a walkway made of pre-cast concrete planks, tapered on one side and reminiscent of tracks amid overgrown vegetation.

Hundreds of different plant types were used, including many bushes and trees that are thriving today in a substrate depth of approx. 45 cm on average. A drip-line irrigation system was installed for plants with greater water requirements. There is a wide variety here, ranging from very damp, moor-type areas to dry Steppe grasses. The aim here is not “decorative” growth but to reproduce the original character of the natural flora and wilderness that had sprung up over the years. You can experience the history of the freight train even more intensely in the recently-opened section, particularly the Rail Yards, named after the large railway yard that still dominates the area. The surface is reminiscent of railroad ballast and in a number of places the tracks from the former rail yard have been incorporated into the simple walkway asphalt.

In the midst of a sea of buildings, and not at all separated from them, the High Line is dynamic and vibrant. However, people do need a break here and there. Park benches, lounge areas and seats and loungers are provided for this purpose. Here we have a sundeck with water features, over there rolling wooden loungers and a multi-layered seated area. From the “Viewing Box”, an area resembling a theatre, you can traffic watch through large glazed panels. Various viewing points provide a view of the Hudson River, the Empire State Building or the Statue of Liberty. Temporary exhibitions are often held on the High Line, and musicians and other artists perform there too. A convincing amalgamation of city, nature and culture.

The High Line attracts not only nature lovers, photographers, performance artists and music groups to south-west Manhattan but also any number of investors. The former industrial wasteland of the Meat Packing District, Chelsea and Hell’s Kitchen has been transformed into expensive trendy neighbourhoods to which celebrities and high-earners are flocking. Haute-couture salons, galleries, cafés and up-market restaurants are shaping the carefully-reclaimed streetscapes. The current most popular hotel in the metropolis of New York, “The Standard”, straddles the High Line, offering spectacular views of the park on stilts. At the southern end of the park, a new home for the Whitney Museum of American Art has been developed by star architect Renzo Piano. Numerous building sites are indicators of new skyscrapers and luxury apartment blocks to come.

A green park has therefore become the economic engine of an entire district, something that has never existed before. This development is, however, a double-sided sword for many of the long-established residents in the area as many of them can no longer afford the rents here.

Prior to the conversion of the High Line, there were a few examples of how former train tracks can be converted to green areas but nothing as spectacular as the High Line nor with such compelling effect nor in receipt of as many awards. Robert Hammond and Joshua David, founders of “Friends of the High Line“, were awarded the “Jane Jacobs Medal” by the Rockefeller Foundation and the organisation itself was awarded the “Doris C. Freedman Award”. Other awards on the long list include the “International EGHN Award” of the European Garden Heritage Network and the “Green Roof Leadership Award” of the IGRA International Green Roof Association.

Never before has a project been emulated so often: In Chicago, a disused railway track is to be converted into a green area; in Philadelphia an 18 m high viaduct; in Atlanta a 35 km green belt (Beltline project) is to be created on a railway ring around the inner city. There are also comparable projects in Paris (Petite Ceinture), Vienna (High Line Park Vienna) and London (Garden Bridge over the Thames). It is not only big cities that have big ideas: Krefeld in Germany is planning a hundred-year project with a 14.5 km long promenade.

The level of acceptance and the wave of emulation are a clear indication that the inhabitants of large cities want nature at their doorstep too. This is reason enough to seek out further suitable areas for publicly accessible roof gardens. With well-engineered green roof technology virtually anything is possible.