Is this roof garden a luxury? 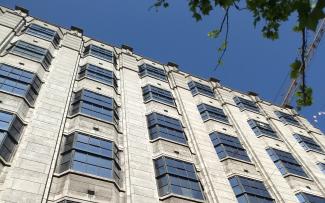 It is not obvious from the outside of this Bungehuis protected structure on Spuistraat what the new Soho House Amsterdam actually has to offer on the inside and on the rooftop. © Mark Veldhuizen, De Enk Groen & Golf B.V. 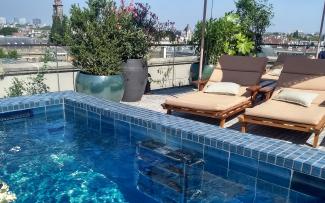 Soho House has long been the epitome of luxury: A rooftop pool is always part of the deal. © ZinCo Benelux B.V. 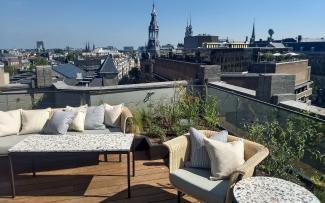 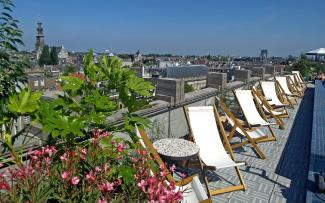 The many loungers are an invitation to sunbathe. © ZinCo Benelux B.V. 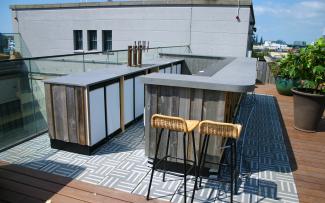 The bar is built on a raised part of the roof. © ZinCo Benelux B.V. 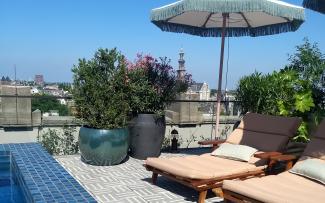 The hallmark of Soho House is on display even on the rooftop, creating a harmonious coming together of various different colours and patterns. © ZinCo Benelux B.V. 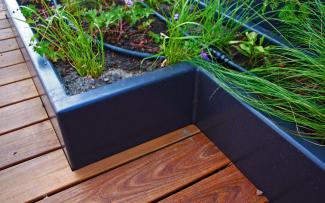 Grasses and perennials in lush growth thanks to the dripline irrigation system. © ZinCo Benelux B.V. 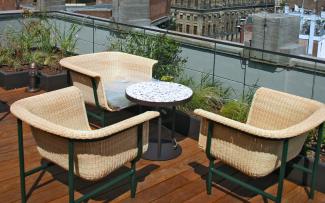 The cosy group seating on the roof is an invitation to linger a while. © ZinCo Benelux B.V. 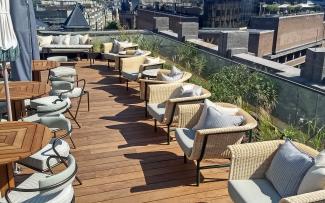 Beneath this wonderful roof garden in Soho House there is an ingenious system technology for stormwater retention. © ZinCo Benelux B.V. 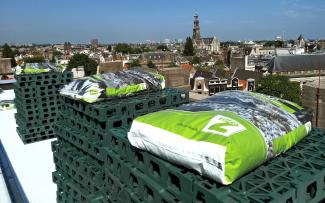 A tower crane was used to lift all the material onto the roof - from the retention spacers to the substrate, which was supplied in bags. © Mark Veldhuizen, De Enk Groen & Golf B.V. 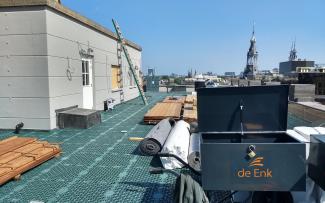 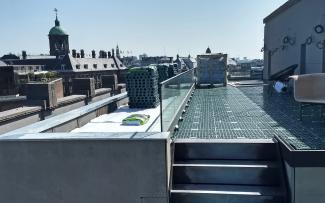 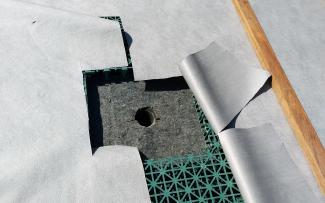 The ZinCo run-off limiter set was installed in the recessed area around the roof outlet to regulate the flow of water. © Mark Veldhuizen, De Enk Groen & Golf B.V.

The run-off limiter is adjusted using two rings that slide against each other and is protected beneath the inspection chamber. © ZinCo Benelux B.V.

Relaxing on a lounger, bathing in the pool with a 360° panoramic view of Amsterdam or simply having a cool drink at the bar? The exclusive design of the roof garden at Soho House Amsterdam provides 900 m² of luxury at a lofty height and in addition to that, makes a valuable contribution to ecology and sustainability. The special ZinCo system build-up “Stormwater Management Roof” used in Soho House stores up to 60 l of rainwater/m² of roof area and releases it with a time delay. In the event of heavy rain, this relieves the municipal sewage system and therefore provides protection against flooding. In these times of climate change and an increase in heavy rain events, stormwater retention on the roof is no longer a luxury but is pure necessity!

Soho House is a private members’ club set up, according to the founder, Nick Jones, for people in the international creative industries: for artists, writers, art curators, musicians, fashion lovers and media professionals. The first Soho House opened in London in 1995 and today there are 27 Houses in unique locations around the world that focus on all things cosmopolitan and artistic. An unusual location was also chosen for Soho House Amsterdam. It is the Bungehuis building on Spuistraat, a protected structure, in a premium location at the heart of the Canal Ring, near the popular shopping district of Negen Straatjes and only a stone’s throw away from Dam Square. The impressive six-storey building made of limestone and granite was built in the 1930s as a trading house and had been used since the 1970s by the University of Amsterdam, and the historic details were retained. Reflecting the distinctive originality of Soho House, Kentie en Partners Architects planned this renovation on behalf of Aeses Real Estate.

Original in every respect

79 guest rooms in all, from tiny to XL monumental, club lounges, meeting and conference rooms, fitness studio, a spa with a proprietary concept the “Cowshed Spa”, a library, screening room, smaller bars and Cecconi’s Restaurant – all created in the middle of restored marble - with wood panelling, glazed tiles and stained-glass windows. The vintage style exudes the quiet chaos of stylish furniture, fabrics and rugs. Art Deco details and contemporary art are thrown into the mix. No two rooms look the same – that is Soho House. The same hallmark can be seen on the rooftop with its visually striking tiles next to wooden flooring. Loungers, mosaic tables and various different planters with flowering greenery are lined up around the deep-blue pool.

A glimpse beneath the surface

The wonderful rooftop design concepts – created by landscape architect, Marnix Tavenier – were all possible thanks to the ZinCo system build-up “Stormwater Management Roof”. This special system for stormwater retention was installed in May and June 2018 by De Enk Groen & Golf B.V.

First of all, Protection Mat SSM 45 was installed onto the root-resistant roof waterproof membrane, across a partial roof area of 500 m².  This was followed by the 0.60 m × 0.60 m large and 65 mm deep RSX 65 retention spacer elements. They allow for a retention capacity of up to 60 l/m² and are particularly suitable for increased loads, for example, flooring. With regard to the overall area, the retention spacers have a calculated retention capacity of about 30,000 l of stormwater which drains into the sewage system over a maximum period of 48 hours. The run-off volume is set using two rings in the run-off limiters that slide against each other and that also function as an overflow. The run-off limiters lie protected beneath inspection chambers with narrow slots that prevent foreign matter from entering. The RSX 65 retention spacers are covered by the System Filter PV followed by further build-up elements, depending on the intended use.

The greened roof areas comprise approx. 150 m² of intensive green roof with ornamental plants and 130 m² of classic extensive sedum green roof. The appropriate ZinCo system substrate for intensive and extensive green roofs was brought onto the roof in bags and applied with a substrate depth that varied between 15 and 40 cm. This was easily done thanks to the edging for some plant beds. The planting plan provided primarily for a wide variety of perennials and different grass types that are well irrigated by means of dripline irrigation even during dry periods and therefore grow abundantly. De Enk Groen & Golf B.V. is also commissioned with the maintenance and service of the roof garden.

The fortified roof areas comprise 320 m² of tile covering and 190 m² of wooden flooring that is installed on a suitable wooden substructure. In addition, 100 m² of Zincolit® clay tile grit have been applied to the peripheral areas. Generally speaking, there are different roof levels here as the bar is mounted on a steel frame structure. The pool is also installed somewhat higher as it naturally requires sufficient depth. Steel columns are used to reinforce the structure, given the loads here.

This special roof garden with its various design elements was created within a very tight time frame of only six weeks. This required successful and effective collaboration between the developer, the roofers, green roof contractors, fitters and pool builders, all of whom had to be on the roof at the same time. This was made more complicated by the special location of the building on Spuistraat: confined space without storage areas, permits required to close the roads and all materials brought onto the roof with a tower crane. Everything was then done by hand there. However, thanks to an ingenious logistics and the site planning, these challenges were all dealt with in a superb manner. And, Soho House Amsterdam opened its doors on schedule in the summer of 2018.

Soho House is a fantastic example of what can be done in densely built-up cities to bring back life into old buildings and in doing that, to provide huge value added. For this reason, Soho House was one of nine projects nominated for the Geurt Brinkgreve Prize 2018. This prize is for renovation and refurbishment projects in Amsterdam that also live up to cultural-historical values. Soho House is not just an asset for its own members but also for the general public who have free access to the ground floor with Cecconi’s Restaurant and the Cowshed Spa. And, thanks to its Stormwater Management Roof, Soho House makes a valuable contribution in terms of protection against flooding in Amsterdam. Water has always been part of the character of this city with its famous canals but, at the same time, water poses a great risk. It seems, Amsterdam has discovered new solutions with our Stormwater Management Roof.