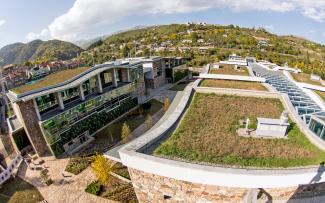 Students from over 50 countries live and study in a village-like community at United World College in Dilijan, with all their cultural, religious and political differences. © Danil Kolodin / Tim Flynn architects 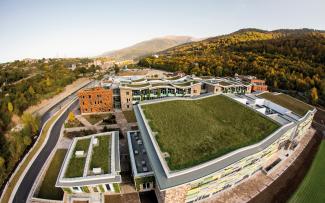 About 7,000 m² of green roof ensure that the buildings blend into the surrounding National Park. A construction project that has won a number of international awards. © Danil Kolodin / Tim Flynn architects 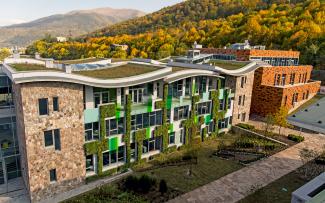 UWC opened its doors in 2014 to 96 students, the future permanent number of students is 650. The college provides another option on the educational landscape in Armenia, which is traditionally held in high regard. © Danil Kolodin / Tim Flynn architects 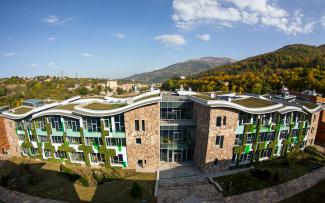 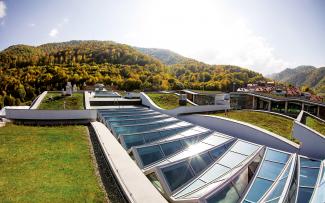 Playfully rising and falling: the green waves alternate with the zig-zag of the glass roof. © Danil Kolodin / Tim Flynn architects 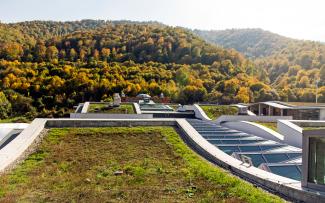 The ZinCo system build-up with Floradrain® FD 40-E ensures that the grass sods of the “Armenian Meadow” will take root and continue to grow. © Danil Kolodin / Tim Flynn architects 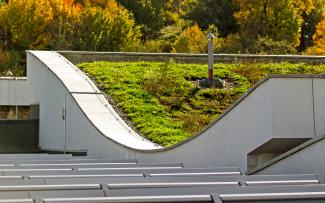 The roof pitch of up to 10° is very easy to see in profile. © Danil Kolodin / Tim Flynn architects 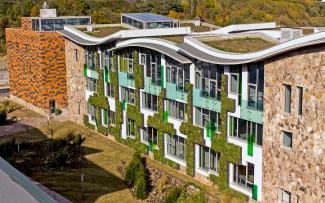 The living walls have a strong visual presence and are particularly important because the students are included in their cultivation on site. © Danil Kolodin / Tim Flynn architects 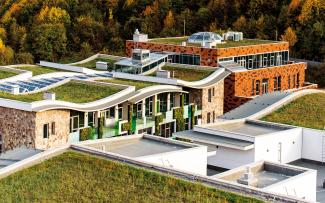 Dividing the roof into a number of smaller areas softens the overall effect. Bio-diversity is to be expanded specifically through the annual donation of plants. © Danil Kolodin / Tim Flynn architects 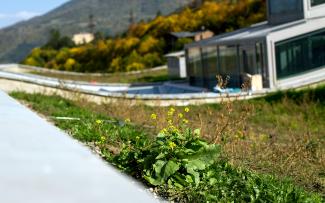 The enormous bio-diversity of the 1 m strips of grass sods along the roof edge will extend to the other areas of the roof over time. © Danil Kolodin / Tim Flynn architects

Philanthropic – International – Inclusive – Sustainable – these are all descriptions that apply to the new United World College (UWC) in the Armenian city of Dilijan. One element of the sustainability aspect is the green roof. About 7,000 m² of green roof contribute to the incorporation of the UWC building complex into the newly developed campus in the surrounding National Park. Similar to the adjacent hilly landscape, the roofs are undulating like waves. The ZinCo system build-up with Floradrain® FD 40-E provides for wild greenery on the roofs, some of which have a pitch of up to 10°.

The term “philanthropy” refers to human-friendly thinking and behaviour. The Armenian-Russian couple, Ruben Vardanyan and Veronika Zonabend provided the financial basis through their foundation RWZ for philanthropic construction projects. This project, the 14th United World College, in Dilijan, developed from what was originally meant to be a summer camp for young people but today boasts students from about 50 countries. It is not a school for the children of wealthy parents but is accessible to all, regardless of their social background. The United World Colleges around the world are all united in striving to achieve international cooperation, peace and tolerance. And each of them is marked by its geography and by the culture of the country in which it is located. The Republic of Armenia is a landlocked country in the Caucasus and is located between Georgia, Azerbaijan, Iran and Turkey. In terms of geographic size, at 29,800 km² this very mountainous country is about the same size as the German state of Brandenburg. Dilijan is north of Lake Sewan, in a mountain valley within the Dilijan National Park, a nature reserve, at an altitude of about 1,100 m above sea level. The entire area that is being considered and developed for the project covers about 80 hectares and has been divided into three segments: Phase 1 includes the campus with its school and administration buildings, cafeteria, swimming pool, gymnasiums, pitches, various courts and residential buildings. Phase 2 will include the Performing Arts Center with a small opera house and phase 3 will involve a teaching garden with an orchard and vegetable patches. All of this has been or will be designed by Tim Flynn Architects in London and the landscape architects glaßer & dagenbach GbR in Berlin, whose comprehensive experience of foreign projects has been of huge benefit to the project.

While the young students at UWC embody the peaceful co-existence of nations, cultures and religions, the space required to do this was created by architects, the plan being to incorporate the building mass into the existing environment as fully as possible. The former orchard in the fecund valley was to be reinstated without delay. One part of the task, therefore, involved greening the roofs and façades of the buildings with as great a percentage of local resources as possible and creating a large cohesive orchard on the campus. All pathways were constructed using natural stone paving (locally sourced tuff stone and basalt lava). However, only a few plant species could be grown from the local flora due to a lack of time and gardening expertise.

The extraction of local lawn seed and the production of turf rolls are unknown in Armenia. However, it was possible to acquire grass sods from the meadows around Lake Sevan by manually peeling off strips of sod using a shovel. Thanks to the deep roots, the gaps in the meadows will close up again. This “Armenian Meadow” was used across an area of almost 2 ha and also for parts of the roof. The plan is for it to take seed and require little mowing in order to preserve and expand its bio-diversity.

“Armenian Meadow” on the roof

The ZinCo system build-up with Floradrain® FD 40-E provides a solid foundation for the near-nature roof plant. The roof specialists, geesa LCC from the capital city of Yerevan, experienced partners of the green roof manufacturer, ZinCo, were the contractors for the green roof works. Work on the various different parts of the concrete roof, some curved, took about four months. The green roof build-up was installed on the rootresistant, bituminous waterproof roof membrane, in each case beginning with Protective Sheet 45. The 40 mm deep drainage and water storage elements Floradrain® FD 40-E were quickly fitted across the entire area by installing the 1 × 2 m elements butt jointed and securing them with connectors. Floradrain® has water storage cells, openings for ventilation and diffusion and an underlying channel system throughout. Filter Sheet SF is then installed on the drainage layer followed by 15 to 20 cm of a substrate appropriate for the vegetation with the “Armenian Meadow”. Local top soil was mixed with zeolith and lava to create the roof substrate. Being a country of volcanic origin, Armenia is rich in lava and pumice. Both of these are mineral components that are just as suitable for roof substrates as is zeolith, which can be acquired from a large storage facility about 80 km away. Applied using a crane and chute, the substrate was distributed evenly and the planting work was started. The locally resourced strips of sod, about 1 m in width, were installed along the roof edge. On the other areas of the roof, seeds will sprout that small farmers have swept out of local hay barns and gathered up. Over time, the same types of sod strips are intended to seed in the seeding zone.

UWC does not wish to have greenery on the roof the whole year round. The general aim is to develop the vegetation naturally so that it will fit in with the local climate, which, incidentally, is comparable to the climate of the Alpine foothills. For this reason, the roof areas are lightly irrigated only during a dry August, otherwise the local precipitation is sufficient for the survival of the plants. The plants are yellow in colour for a few months, and are therefore dry.

Moreover, the students in each year are meant to bring home and plant the new plants they collect during their trips, in order to increase biodiversity. In particular, local seed species and rock foils are absent from the range available here. In this way, dealings with nature will not remain an abstract concept at UWC but will be entirely conscious and experienced in day-to-day life. Many local young people and children and also students have already been involved in numerous greening projects, and also in the living walls, which were cultivated on site before being installed on the building walls.

“Everybody contributes what they know and are able to contribute”, says landscape architect Udo Dagenbach, who is passionately involved in the workshops at the summer camps and also works in an honorary capacity in marketing future nursery products.

The Performing Arts Center has already been planned and will have green roofs combined with solar energy systems over an area of 2,550 m². This is a useful combination that has many synergy effects that can be executed together with the ZinCo system build-up “SolarVert”, with integrated installation for mounting the solar modules.

In addition, the aim with these buildings is to ensure that the surface, roof and irrigation water can all be recycled. An “aquaponic system” was designed so that the systems would be visible and plausible: in a type of cascade effect, the water runs through plant zones for biological purification, mineral zones and a fish tank for enrichment and is collected again in an underground basin for re-use as irrigation water for the green roofs and living walls.

Bridges into the future

The plans for the teaching garden with orchard and vegetable patches are in full swing. The garden will be at the other side of a small stream, accessible over a bridge, and will include a greenhouse, a soil mixing area and an earth bunker for the energetically appropriate storage of fruit and vegetables. The plan is that locals, and children in particular, will become involved here too. “The many intelligent minds provide a constant flow of new ideas”, says Udo Dagenbach proudly and hopes that it will never end.

With this flagship project, the college is playing a significant role in the development and revival of an entire region. And it will certainly contribute to building bridges and forging new links between the Armenians and the rest of the world.